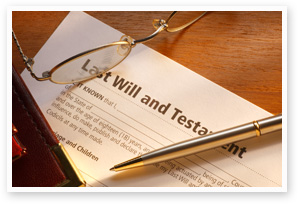 Ann Aldrich used an “E-Z Legal Form” when she made out her will in 2004, a decision that proved to be a good choice for two nieces who cited the document’s lack of a residuary clause.

In a decision issued last week, the Florida Supreme Court ruled for the nieces, though they weren’t mentioned in the will. The court said money acquired by Aldrich after the will was made out should be distributed under the laws of intestacy, which govern distribution of property for those who die without a will. The reason: The E-Z form did not have a residuary clause providing for the disposition of property not listed in the document. FlascBlog: The Florida Supreme Court Blog reports on the opinion (PDF).

Concurring Justice Barbara Pariente saw the ruling as a cautionary tale. “While I appreciate that there are many individuals in this state who might have difficulty affording a lawyer,” Pariente said, “this case does remind me of the old adage ‘penny-wise and pound-foolish.’ …

“I therefore take this opportunity to highlight a cautionary tale of the potential dangers of utilizing pre-printed forms and drafting a will without legal assistance. As this case illustrates, that decision can ultimately result in the frustration of the testator’s intent, in addition to the payment of extensive attorney’s fees—the precise results the testator sought to avoid in the first place.”

Aldrich’s will had left all her property to her sister, and then to her brother if her sister predeceased her. Because the sister died first, the brother had claimed he was entitled to the entire estate.

The will specifically said all “listed” items should go to Aldrich’s brother, the Florida Supreme Court said in an opinion by Justice Peggy Quince. “Therefore, it is clear that the testator did not intend for any property not listed to be distributed by the will. Any other interpretation of the testator’s actions would require this court to rewrite the will to include provisions regarding property for which the testator made none.”

Aldrich had signed a handwritten note after her sister’s death saying all her “worldly possessions” should pass to her brother, with the exception of certain bank accounts that should pass to a niece, the brother’s daughter. The document had just one witness—the niece who was to get the bank accounts—and was unenforceable under Florida law.

The nieces who asserted an interest in the estate were the daughters of a different brother who had already died.